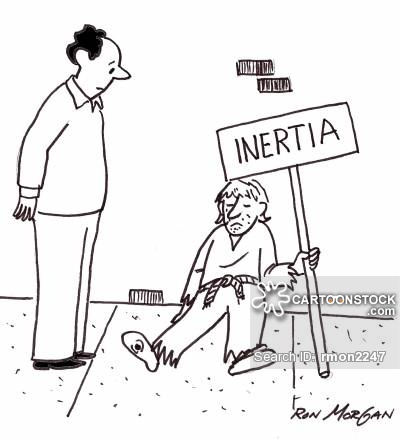 Let me tell you something about Inertia,

Inertia can be defined as the tendency to do nothing or remain unchanged.

It is a state that usually creeps in on us particularly when we see a task as daunting, or after we just acquired a huge feat, and trying to get into another task before us.
It is state that keeps one in a state of helplessness and joblessness, particularly when you need to get up and keep moving.

You realize you can’t move or get out of that state, and time keeps moving so fast that you can’t help it.

Inertia has made people to go late for job interviews, and miss important appointments  which could have ended up changing their lives for good.

One of the ways to conquer inertia is not to feed it.

How do I mean?

I remember when I was writing my book Motherhood and the Society, and I had set a target for myself that it was a first quarter project. February was about ending and I was still far behind.

I was so sad, but I could not help myself or get out of that state of inertia.

I would come on Facebook, scroll and scroll, read some posts which would upset me and further drive me into a state of inertia.

I snapped out of these after two weeks of not making progress and time was flying fast.

However, the second day I got out of the state of inertia, and I was able to continue writing. For that one week that I denied myself of social media activities, I was able to add a chapter to my book which further gave the book a more beautiful direction.

Inertia is a dream killer, and one needs to be disciplined in order to conquer it.

You need to set target for yourself, and sometimes view it as a matter of life and death in order to be able to snap out of inertia.

Inertia is deadly and can rob you of great opportunities and visions.

Do not let inertia get you.

Have a beautiful day ahead.

Please subscribe to my blog bellow, so you can receive my posts in your inbox.

Thank you so much for your support.

Mercy Praise demystifies Boundaries and how it Affects our Mental Health

Mercy Praises gives an exposition on why many Women Businesses fail.

Driven By Passion Or Purpose?

Oluwatosin Arodudu’s Book “Identity” Will Help You Define Your Purpose